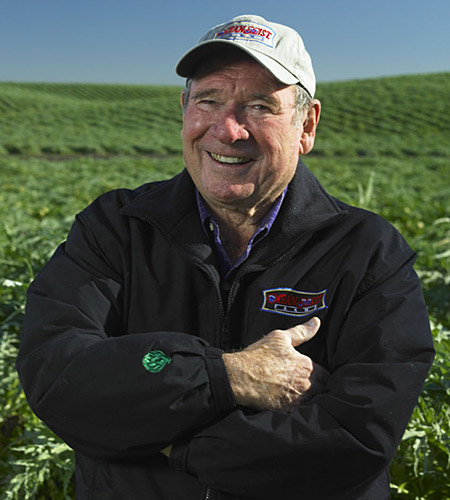 Hugo Tottino was born in September 1926 on Molera Road near Castroville, California. He never strayed from his roots for long. Castroville was the scene of his grade school education before he attended Salinas High School. After he graduated in 1944, he continued his studies and “played football” at Hartnell (it was called Salinas Junior College at the time) briefly before being called up by the Navy in November that same year. After serving in various Pacific ports such as San Francisco, Pearl Harbor, Guam, Saipan, and Bikini, he was discharged in July 1946 and returned home.

It was his intention to continue with his education at the JC but, as he tells it, “the registration line was too long.” Randy Barsotti, a partner in California Artichoke and Vegetable, spotted him standing there and asked Hugo to come work for them. Randy’s argument must have been convincing because after two days of school, Hugo started work at California Artichoke and Vegetable (now Ocean Mist Farms) and has been there ever since. He eventually became one of the partners but back then he started working the docks.

“We received the artichokes,” he explained. “We’d tell the growers all to get there in the morning (they got to know that) because then we’d start setting up the orders. We’d unload ‘em and then start loading all the trucks. After we loaded all the trucks, then we’d have to load all the [rail] cars. Everything went by rail car. So, then we’d have to load all these cars and we’d stay ’til we finished for the day. It might be 6 o’clock it might be 9 or 10, depending on how much work we had.” Five rail cars at a time would be parked on the spur located directly in front of the old shed. “We’d load all those five cars in one day and we’d have to wait for the switch to come,” Hugo continued, “the train would only come at certain times. They’d pick those up, put more back in. Then we’d load some more. Then we’d blow ice up on top of the car. We used to load a lot of straight cars of artichokes in those days. And it was a bigger box. I remember 504 boxes to a car.”

Five rail cars at a time would be parked on the spur located directly in front of the old shed. “We’d load all those five cars in one day and we’d have to wait for the switch to come,” Hugo continues, “the train would only come at certain times. They’d pick those up, put more back in. Then we’d load some more. Then we’d blow ice up on top of the car. We used to load a lot of straight cars of artichokes in those days. And it was a bigger box. I remember 504 boxes to a car.”

When he wasn’t working at the shed, he was working his family’s farm. As he explained it, “I stayed there only during the artichoke season. That was from after Labor Day until the end of the artichoke deal—say the end of May—and then I would go to the Ranch.” It was a 40 acre-spread where he grew artichokes, cauliflower, and Brussels sprouts. “I liked artichokes,” he says, “and got lucky. We hit a couple of good years—so from there, I stayed in the artichokes.”

During the 1950s, many of his neighboring farmers were going out of business. Heeding some sage advice from his father, he bought existing leases whenever possible. He picked up partners and continued to expand his business. In 1955, when existing canneries were not offering decent prices for artichoke product, he was instrumental in forming Artichoke Industries to process artichokes.

Asked if he had any advice for today’s young growers, Hugo would respond, “I cannot believe how fast it’s changing. It’s just a completely different ballgame. We’ve seen changes…this computer is bringing more and more…they have to be aggressive to stay on top of so many different problems. Then you have the market and you don’t have prices; and, yet, there’s always someone there that will take your place if you leave. Things are tough. That’s why a lot of them are getting so big…to stay in business.”

“You know, I want to stay in farming — I love it,” he continued, “but conditions are changing so much. Look at your cotton farmers today. Look at even your great America — your corn, your soybeans, and all that. I always love to say people will go to a bar and spend $4 or $5 for a drink or $10 for a bottle of wine but they don’t want to pay $2 for a head of lettuce or a melon or something like that. That’s my point. That’s the way it is.”

Hugo foresaw other changes in the artichoke industry including continued improvements in the seeded (annual) varieties. He said it may take a little time, but such development is important because of their higher yields and lower growing costs compared to the Green Globe (perennial) variety. In addition, value-added packaging of artichokes, which should shorten preparation and cooking times, is on the horizon, too.

When asked the “high point” of his career, he reflected a moment and said, “I’ve made so many good friends and partners. I had partners on a handshake — no papers, no anything — and everything was 50-50 or whatever it was, and I never had a [formal] partner agreement. Today, if you don’t have a lease or go to three or four different attorneys, it’s a different ballgame.”

Hugo passed at an age of 91. He was fit and thankful for his good health. In addition to daily walks, his advice was to eat more fruits and vegetables. “I grew up in a house where we had a lot of vegetables and fruit,” he said, “and I honestly believe that people don’t have enough. They say 5 a day, I say even more. Not because I’m a grower — [but because] it’s good for you.”

“Eat more fresh artichokes, too,” he grinned. “Naturally, I’m prejudiced. I love artichokes. I always have.”

He adored his wife, Dolores, to whom he had been married for nearly 66 years. He loved his five children and nine grandchildren. And he could not imagine the possibility of retirement.

Hugo had an extreme fondness for the people he worked with and knew every employee’s name as well as their children’s names and made it a point to ask how they were doing each and every day. As the business grew, Hugo continued teaching what he had learned about the fresh produce business to each of his employees, as well as his children.

Hugo had a heart for serving others and giving back to the community. He supported several local charities, usually anonymously and certainly with great modesty. He led the way for the Castroville Seawater Intrusion Project – irrigating 12,000 acres with reclaimed water. Hugo also graciously donated land to the Elkhorn Slough Foundation to restore wetlands and provide wildlife habitat even when food safety restrictions discouraged the practice. He helped create the Artichoke Advisory Board in 1960 where he was a long-time director. He was also perennial sponsor of the Artichoke Festival.

Hugo was extremely proud to have been chosen as a member of the first class of the “People to People” program along with a group of local farmers and businessmen to travel to Russia during the cold war in 1963. The “People to People” program was established by President Dwight D. Eisenhower to enhance international understanding and friendship through educational, cultural and humanitarian activities; he felt that creating understanding between people was essential to building the road to enduring peace.

In 2015, Hugo was awarded the Grower Shipper Association of Central California EE Gene Harden Lifetime Achievement Award for his leadership and support of the fresh produce industry.

Hugo could always be heard saying, “I wouldn’t know what to do without work. I go down there every morning six days a week. I’m down there by 7 a.m. and they let me do more or less what I want. I enjoy that. I really do! A lot of people don’t like to get up to go to work. I enjoy it — I’ve enjoyed every minute of it. I’ve been awful lucky.”